A downloadable game for Windows, macOS, and Linux

A tale of dark and troubling things.

If On A Winter's Night, Four Travelers is a narrative-driven point-and-click adventure that explores the stories of four different characters in a masked ball taking place on a train in the late 1920s.

In a luxurious hotel room in Rome, freshly arrived from Turin, Carlo awaits for his lover Patrick to arrive. However, as the shadow of fascism looms ever larger, the tension of meeting in constant hiding is beginning to take its toll.

THE SLOW VANISHING OF LADY WINTERBOURNE

Lady Winterbourne has lost her husband in a tragic accident. Now letters from pretenders to her vast fortune keep arriving every day at her mansion, yet the only thing she's interested in is the bottle of laudanum in her cabinet.

Harassed, ridiculed and belittled by his peers, Dr. Jordan Samuels has resorted to the occult sciences in a desperate attempt to turn the tables on his tormentors. But is he truly ready to face the Guardian of the Threshold?

IF ON A WINTER'S NIGHT

As much as Laylah enjoys her job, sometimes she yearns for a bit of variety to distract her from her daily routine -- even if it means going against her very powerful bosses' orders.

BROUGHT TO YOU BY:

Additional sound effects from freesound.org and the BBC sound library.

This game contains references to thematic elements such as racism, homophobia, mental illness, murder and suicide.

This game is breathtakingly beautiful, especially Lady Winterbourne's section! It's also a really fun period piece (I can't speak for it's accuracy, but I can speak for the impeccable vibes) I just wish it was longer, haha. The ending scene with Laylah did take me out of the experience a bit, I wish the train had remained mysterious.

Cannot get the game to work, I tell it to 'run anyways' and then get an error as soon as it reaches 100% loading.

Maybe it can be attributed to the Computer antivirus.Try to  make them Trusted software.I'd appreciate it if you say that this way do works.

Heavy, I  really felt for the characters. Thank you for the experience.

One of the most creative games I've ever played: from the art and animations, to the soundtrack, the puzzles and the storylines. The atmosphere is so immersive that it was impossible to get bored even for one second. Also, I've played a lot of games in pixel art but this one is in a completely different level of detail!!!! BRO ITS MAGESTIC

This game is an absolute masterpiece

What a wonderful game, indie creativity is the saving grace of gaming! Magnificent art, clever puzzles and exquisite story. Thanks for this jewel!

Came for the Calvino reference, stayed for the amazing art, crying at the story. Thank you for such a wonderful game.

I always enjoy games with a great story, but this one is golden. Amazing!

Thank you for this game!

Good game! But it’s all in English, I had to diligently use logical reasoning)

Very good. Incredible style. Played on Steam and immediately hopped over here to see if you had an itch page so I could pay for this gem, offering it for free is wild. Well done.

The DLC is also available on Steam! 😄 Thanks in any case and glad you liked it.

haha maybe it confused me! I always prefer to pay on Itch when possible, but from your POV is it more beneficial to get Steam purchases & reviews, or Itch purchases?

Doesn't make much of a difference to us! Steam's cut is higher than itch's, but on itch we pay more processing/transaction fees, so it kind of evens out. The good thing about itch is that people can pay whatever they want, so if the Steam price is too steep for them they can choose to pay less, or if they want to tip us a little extra, they can do that too. But as far as we're concerned, we're good (and grateful) either way 🙂

Could you please add the Mac version to your Steam release?

The music and art fit soo well with the story. It's a short game (I finished it in two hours and I'm slow) but the characters are very well written and the game itself is so pretty

Thank you for this amazing game!
You can check my full game playthrough here:

I loved the game, the ambiance and the characters. Great job!

You only see the train in cutscenes, you don't need to do anything to get past the opening in the train but let the cutscene play. If the cutscene isn't progressing then the problem is not that the controls don't work but that the game is soft locking during a cutscene.

I'm sorry I don't have a constructive suggestion, but hopefully this information will help in working out a solution with the devs.

The pixel art is 10/10 no joke and the pace of the story was wonderful. To top it off, a very nice choice of soundtrack to set the mood inside this story. 🥸

About the pace, during the 1st story for example, I really appreciated the way you first have to look through all the room to find the things required to prepare before Patrick comes around. This is a nice way of getting more familiar with the whole place and understanding what each item does. By the time he came, I already felt like "I know the place" which is a very good point.

I must admit that as a straight man, I did cringe a little here and there during the 1st story but still, regardless of my personal beliefs, I have to admit that it was indeed an interesting story. 👍

Feedback (to go even further beyond!!!):

To be honest, I really don't have much to say... the game was very good at everything it was trying to achieve. A very nice experience.

If I could change one thing though, it'll be the walk speed.... because them these guys are slow. 🤣

Other than that, I don't see anything else that deserves revisions...

An amazing experience. Props to you guys! Keep up the good work! 👌

I'm a straight man and I'm genuinely not sure why the first story would make you cringe. It seems really strange to frame your discomfort as something that is automatically a given due to you being straight.

Genuinely amazing. The sheer amount of atmosphere alone is enough to make me love it, but the writing is amazing and they compliment each other beautifully. I seriously couldn't put it down for how entranced I was. If it was 10 hours long, then I would sit for those 10 hours cause it is just that enthralling.  Love it, love it, love it.

Loved the game! A short but interesting experience

This is so god damn good! I just loved playing this game, the atmosphere, the soundtrack, the storys, real and fantastic and ruthless... so dark and wonderfull, like a nightmare and a dream at the same time... I fell in love completely!

Wow I absolutely loved this game! The stories were so compelling and were profoundly sad. I wish there was a happy ending for all of the travelers though. This is just a really beautiful game!

Finally commenting on this, I love this game so much, the dark atmosphere is AMAZING! The third story confused me a little bit though ha ha

This was an absolutely fantastic game! I love the idea behind it and each of the stories were so lovely!

Your game reminded me why I love games
Thank you

I played on the macOS without any trouble.

The game is very well written and has terrific  atmosphere! I am absolutely returning for any projects you do in the future!

one of the best games I've ever played from itch, I couldn't stop playing from the moment I started it and I was glued to my computer until it ended. thank you for this amazing piece of art <3

Very good game but the ending was a bit predictable.

the most amazing game i have ever played.

What story down there awaits its end?—he asks, anxious to hear the story...

This was quite an experience, found this thanks to the Randomizer.

This game looks incredible so far, and I can't wait to beat it! I played the first chapter on my channel, and I'm so excited to continue! The art is amazing, the music is beautiful, and the story is great so far. Thanks for making this game!

(PS: Part 2 is coming out tomorrow if anyone's interested!)
Reply
retrogamingaddict292 days ago(+3)

Congratulations on your huge haul of AGS awards for this game. It was Superb.

Goddamn that was somethin' else. Glad I finished it

This madame was incredible, the story and how it all fit together and connected back to Laylah absolutely incredible, I'll be recommending this to some people

A fantastic game!! I haven't played a masterpiece like this in ages! Thank you for the marvelous ride.

Great game! I made a video on it.

I haven't had this kind of experience playing a game in a long while, so I want to thank you! From the storytelling to the tiniest details of each pixel, this game gives everything it has to the player. I really want to know why certain masks were used, whenever if they have any history to the characters of if the developer picked them just because. I really want to know more!

Additionally, I loved the switching of different viewpoints, from going onto the train, third-person I believe (correct me if I am wrong!) and when we relive the final moments of the characters, isometric viewpoint. I adored this game, and I can't wait to see more from Laura Hunt!

9/10, the first puzzle felt a bit short and rushed, but everything else was as close to perfect as it can get!

The art for this is beautiful, I'm downloading specifically for that.

Hi, I don’t normally leave comments but I felt like I had to for how much this game impacted me. This is truly a work of art. I encourage everyone to play it. Thank you for making such a kickass game. 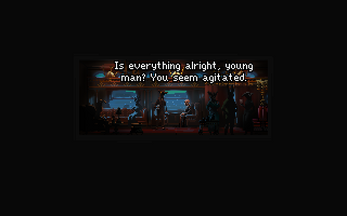